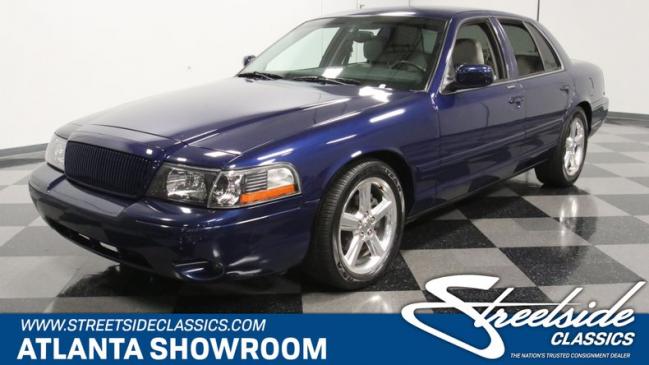 With an impactful yet understated appearance and a potent engine anchoring its drivetrain, this 2003 Mercury Marauder is a tastefully unique take on the American full-sized car that's in clean condition and ready to add some pep to its next lucky owner's driving routine.

While at close range you can see some subtle signs of the passing years on this Mercury's exterior, this remains a sharp looking ride. You won't find many (if any) like it during the course of your travels, and for good reason - it's part of a very select group, as only about 300 of its kind left the assembly line dressed in its signature dark blue shade. The Marauder name had graced a couple of Mercury models quite some time ago, but there was an unusually long 33 year hiatus before it was revived as its manufacturer sought to create a potent full size ride with plenty of accommodations for passengers, but with a more aggressive overall presence to better reflect its performance abilities. The Marauder's relatively low stance and overall monochromatic appearance show the effectiveness of Mercury's efforts - the car has an innate, Secret Service-esque gravity to it. The added color-matched and de-badged front grille adds even more distinction to this Mercury's appearance without going too far, aesthetically speaking.

Plenty of interior room and a strong array of great comfort features make this interior plenty inviting. While you'll find evidence of wear on both the light gray leather front buckets and rear bench, rest assured that these accommodations are plenty road ready just as they stand - there aren't any serious issues to be found inside the doors and this interior's overall comfort is still very much intact. The array of white-faced factory gauges in the instrument cluster still function as intended and are joined by aftermarket AutoMeter displays above the center console. Post-2000 cars generally have a decided advantage over their predecessors in the features department, and this Marauder is no exception, as it comes with power windows and door locks, power heated seats, cruise control and remote-opening doors to go along with air conditioning that's in fine form. You'll have no shortage of options at your disposal while behind the wheel, as the featured AM/FM/CD stereo also offers cassette and iPod compatibility. The gray-lined trunk area is also nice and tidy, securely harboring a spare tire on its shelf that's wearing a branded cover.

The fuel injected 4.6 liter DOHC V8 you'll find under the hood is a fine representative of the same engine species also found in the Ford Mustang Mach I during this era. It's a potent powerplant, good for more than 300 horsepower and running in top form, and it teams with a smooth shifting 4-speed automatic transmission that shifts flawlessly while offering an overdrive gear for low RPM cruising at highway speeds. Outfitted with power disc brakes on all four corners, this Marauder can also stop as impressively as it accelerates. Smooth and responsive power steering makes this stylish post millennial sedan easy to maneuver as it rides on its set of factory-issue 18" wheels that are wrapped with Goodyear Eagle RS-A tires that still show plenty of tread.

Searching for a cool ride that combines full-size luxury with an eye-catching look and plenty of power? You really need to check out this 2003 Mercury Marauder. Call today!