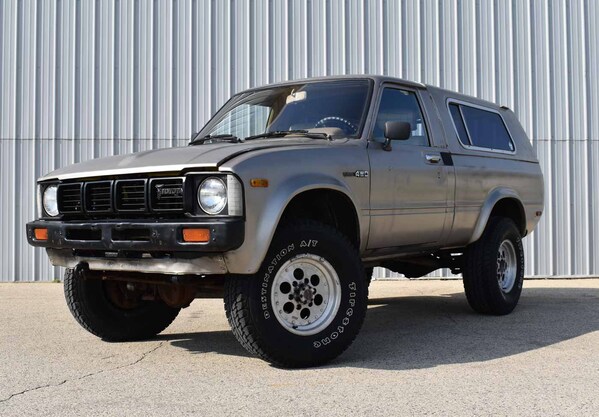 1981 Toyota Trekker SR5 4×4 SUV
Few Toyota fans know that the 1981 Toyota Trekker 4WD Pickup was the brainchild of Oconomowoc, Wisconsin’s very own Jack Safro. The concept was approved by Toyota and executed in collaboration between long-time Toyota dealer Safro, whose son John is known as the authority on the model, and Winnebago Industries, Inc. Based on the Hilux 4×4 Pick up, the Trekker was outfitted with a fiberglass rear body and extra seating to appeal to the SUV market and was quite a success with over 1,500 units sold. The Trekker was also, forgive the play on words, the forerunner to Toyota’s wildly successful 4Runner that was introduced in 1984.

This surviving Trekker has been driven regularly. It still retains its original Winnebago Interior, rear side windows and seating. The interior includes many driver and passenger comforts, reclining bucket seats, power steering and brakes, SR-5 gauges, stereo system, intermittent wipers, and tinted glass. Driven by the reliable and economical 20R SOHC 4-cylinder, 5 speed transmission, 2 speed transfer case and lock out front hubs.
These mid-80s Toyotas were terrific vehicles of great quality and unheard-of reliability, and this example is a testimony to their durability.